These two articles have been sitting in my Evernote blog notebook for months now. They’re still interesting so I wanted to share them.

Neil Gaiman, the author and a big supporter of libraries, gave an interview where he discusses among other things, the library as a safe place. This was an issue I thought was very important for school libraries. He talks about it more in the context of a public library. Read it here.

Woody Caan writing in Times Higher Education about the vital role librarians play in the university context. Read it here.

Here’s a more recent article by John Harris in The Guardian that was relevant to an essay I was writing and also my current work context in a music conservatoire with a significant (and in demand) vinyl collection. My library, based on student demand, recently brought out more LPs into the main stack area and bought another record player. This article highlights the growing synergy or tension in the music industry, also reflected in my workplace, between rapidly evolving technology and a desire to return to roots. Read it here.

Another masterpiece from Sansom, whose Shardlake series I’ve also recommended. This is a weighty tome, at just over 700 pages. While reading it propped up on various pillows and small tables, I starting seriously considering the benefits of e-readers. Dominion is a historian’s “what if…?” tale set in 1952 London. The backdrop is that Britain followed an appeasement policy in World War II resulting in Pearl Harbour never occurring, America never entering the war and subsequent Nazi Germany domination of Europe. It is truly disturbing as you can imagine but also a compelling story of ordinary people standing up for freedom.

Second book in The Meq series about a race of ageless children (they stop physically ageing at age 12) with magic powers and their search around the world and through history for ultimate meaning. All I can say is, it’s mesmerising. And the second book has improved on the first. 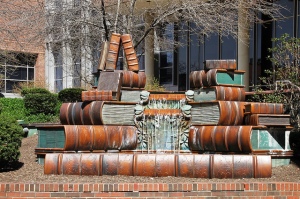 I picked this up for 40p at a charity shop and man, was it worth it. A well-crafted novel that jumps between present day and late nineteenth-century France. I couldn’t put it down. Also for my music friends, Debussy and his circle crop up.

The Ocean at the End of the Lane, Neil Gaiman

I was recommended Gaiman by a school book seller. She said something along the lines of, “Other schools automatically buy any new title by Neil Gaiman, without bothering about what it is. He’s that good.” So I got this from my local library. It is a whimsical, charming and truly fantastic story written from the perspective of a young boy but aimed at adult readers. Thoroughly enjoyed it.

I recently saw this listed in a newspapers’ list of Best Books Ever Written (or something similar) list though I’m not entirely sure why. I read it recently as someone recommended it to me. Set in the early twentieth century, it was very funny, in a P.G. Wodehouse style of humour. The difference being where Wodehouse is all lighthearted and carefree, Waugh had elements of the bizarre and repeatedly underlined the depressing randomness of modern life.

All the Pretty Horses, Cormac McCarthy

A beautiful, sad and sweeping novel of Mexico and rural America set in a vague time in the mid-twentieth century. The language is as spare and barren as the landscape. Recommended by my local librarian, and well worth a read.

notes from the narrow road

from north to south across Japan by bicycle

You can only go forward by making mistakes, even in the library sector

Musicologist and Pedagogue trapped in a librarian's body. I'm qualified in music, librarianship and education. I began this blog when I was studying for my PGCert in Learning & Teaching in Higher Arts Education, and I'm now using it for CPD. I'm a Fellow of the Higher Education Academy. Midweek I am continuing the research I commenced as PI for an AHRC-funded research network @ClaimedStatHall - early legal deposit music. Off-duty I'm hard-wired into my sewing machine!

Academic librarian with 15+ years of experience. Passionate about lifelong learning and student success. Interested in user experience and organizational leadership. For me, being a librarian has never been about the books--it's about the people!

to care and not to care ... to sit still

A meeting place for librarians from around the world.

A group blog by, and for, early career library and information professionals