Second in the two-part series on Semester 1 (Autumn 2014) of library school. For my previous post explaining generally about the course, click here.

This module was called Hypermedia for the Information Professional and introduced hypermedia, e.g. the web and digital technology. Tech skills was a key component that I wanted to do in this qualification and I was mostly satisfied with this module. We covered web design and learned basic web mark-up (XHTML and CSS). This part was ok and I think it definitely helped that I had a bit of knowledge of code already. I found the course material very lacking when completing the assignment which was to write code for a simple, two-page website. This deficiency was due to the content itself and the interface for the teaching material which was a kind of animated, power point type thing. I ended up watching videos on Youtube to solve various problems I encountered when creating my website. One of my “ah-ha” moments was watching a video of a guy talking through and creating all the elements for a basic webpage (sorry can’t give you a link, as I was a bad library student and did not note it down and now cannot find it again). This video made something click for me mainly because of the presentation. It was his voice over explaining the concepts and what the guy was doing, and then there was a split screen video with his text writer window open where he was inputting the code, and then the other side of the screen was the webpage itself being updated in real time, so you could see the effect each bit of code had on the page. As quite a visual person, this method really helped me understand because you could both see and hear what was going on. Anyway I got there in the end with my little website but I think this is a topic that’s best to learn by doing rather reading about about it and it would have helped to have a live person to ask all my questions. 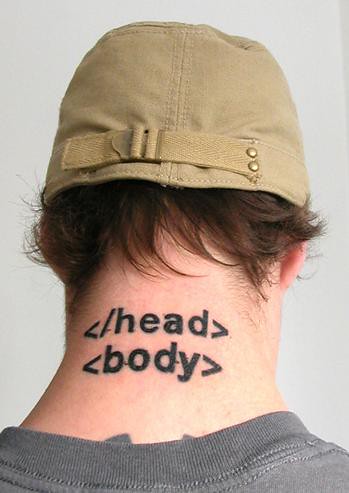 We also looked at usability and information behaviour, both subjects I found absolutely fascinating. I ended up referring back to this material and the sources in later modules quite a lot. For the SEO (search engine optimisation) portion, the main thing I remember is reading through Google’s SEO guide for web developers. A very helpful document with practical advice on how to improve the SEO of your site – an important concept for library websites to understand since most people start an information search on a search engine rather than the library website nowadays! Social media was another area we studied. The set textbook, Managing Social Media in Libraries by Troy Swanson, was excellent and it’s on my list to finish reading.

I think each of the topics we covered in the module could easily have been an entire module in itself…which leads me to say that the main downside to this module was that there were really too many topics under the hypermedia umbrella to cover in one semester. It was very much an introduction, which is fine, but I would have appreciated more time and more depth.

A much belated two-part series on modules I completed in Semester 1 (Autumn 2014) of library school. Here is my previous post explaining generally about the course.

I really enjoyed this module, called Management in the Information Environment. I came to it having zero management experience, so I definitely had a lot to learn. The module covered topics you’d expect like managing change, project management, HR and communications, marketing and finance. I think all of these could probably be a class all on their own, so we were getting more of an overview. It was useful to learn about how to assess external influences (using a PEST analysis), create strategy and the various types of organisational structures. The set text was Managing Information Services (3rd edition) by Jo Bryson. This was good and very thorough, but the lack of real world examples or case studies in the book was a major negative, especially for someone like me who was new to the whole subject. However I was also to get a hold of another recommended book, Charles Handy’s Understanding Organisations, which was in a more readable style and included many examples.

Probably one of the most interesting aspects of the module was the discussion board posts we were encouraged to write on certain topics. Many of the other students are/were in management positions, so it was interesting to hear their take on  topics such as the pros/cons of staff appraisals. For the project management bit, we had to complete a practical exercise using Microsoft Project, which I can see being useful for the future. The marketing section covered the essentials, the Four P’s, market segmentation, etc. The assignment was an analytical report assessing the organisation where you worked or one you were familiar with. I actually really enjoyed doing this assignment because it involved a lot of research and thinking critically about your workplace. Reading the literature gave you ideas which could then possibly be applied in real life because I spent time considering my organisation and what we’re doing. So it was quite a reflective piece of work and I think I learned and will retain more from completing the assignment than from the coursework itself.

Another LIS student’s (Carla Harwood @tribigild) experience of a management class in the USA was an interesting read. I like how their lecturer was a working senior manager herself and former ALA (American Library Association) president. Part of the weekly class was talking about her work week which seems like a great way to learn about management work day to day. I also appreciated the value of one of their assignments, a ‘management consultancy project,’ where the remit was to help a manager solve a real world management problem. As Carla writes, it was good because it was about much more than submitting a piece of work for the module. You were getting some real world experience solving a real world library problem.

My next post will be on the Hypermedia module and all things techy.

In the past month, I’ve gotten to perform in two dramatic works, King Arthur and Dido & Aeneas, by the English composer Henry Purcell (1659-1695). Since I love Purcell’s theatre music, it’s been a good month. I also got to tick off “performing in Dido” from my bucket list, which I’d wanted to do since working as an opera trog for two weeks in 2011 for the Dartington International Summer School production. That was a great experience in terms of arts admin, but I remember sitting backstage waiting to hand over props to actors or some such, and thinking how I wished I was in the pit with the orchestra!

Dido is the earlier of the two works, having been first performed in the late 1680s, whilst King Arthur dates from the 1690s (1). Dido differs from King Arthur in that it is all sung, whereas King Arthur is considered a ‘semi-opera’, a work with sung and spoken parts. Apparently in King Arthur and his other semi-operas, Purcell upends ‘the normal 17th-century relationship between spoken text and music […], the text serving as a narrative framework on which to hang a succession of visually spectacular and musically elaborate scenes involving the use of complex movable scenery or stage machinery’ (1). The performance I participated in with Leeds Baroque was semi-staged, so we had choir, orchestra, vocal soloists and actors, but no stage machinery I’m afraid! The most famous piece from the work is the Frost Scene, which is a supernatural masque summoned by the magician, Osmond. It has a distinctive rhythm to imitate shivering, accentuated by ponticello playing in the strings (playing with the bow closer to the bridge to give a raspier sound). The Frost Scene influenced later works such as Vivaldi’s ‘Winter’ from the Four Seasons.

Dido is full of wonderful music and, at just under an hour in length, is often performed as a concert piece. I performed it with the Leeds Guild of Singers. The instrumental forces were just a string quartet and harpsichord so I found it very challenging but a lot of fun. The most well-known piece from this work is Dido’s Lament, ‘When I am laid in earth,’ where Dido sings about death and ponders her mistakes as Aeneas has left her to sail off and found Rome. It is distinguished by the bass line which is a deeply pathetic, chromatic ground bass. In the Dartington production, Dido was actually buried in earth by the chorus at the end and one of my jobs was to ‘unearth’ her and help her back up for the curtain call!

If you want to listen to either work, I’d recommend (all on Spotify) the Philharmonia Baroque Orchestra and the Academy of Ancient Music (if only for the divine singing of Emma Kirkby as Belinda) recordings of Dido. For King Arthur, the English Baroque Soloists recording is pretty good.

notes from the narrow road

from north to south across Japan by bicycle

You can only go forward by making mistakes, even in the library sector

Musicologist and Pedagogue trapped in a librarian's body. I'm qualified in music, librarianship and education. I began this blog when I was studying for my PGCert in Learning & Teaching in Higher Arts Education, and I'm now using it for CPD. I'm a Fellow of the Higher Education Academy. Midweek I am continuing the research I commenced as PI for an AHRC-funded research network @ClaimedStatHall - early legal deposit music. Off-duty I'm hard-wired into my sewing machine!

Academic librarian with 15+ years of experience. Passionate about lifelong learning and student success. Interested in user experience and organizational leadership. For me, being a librarian has never been about the books--it's about the people!

to care and not to care ... to sit still

A meeting place for librarians from around the world.

A group blog by, and for, early career library and information professionals